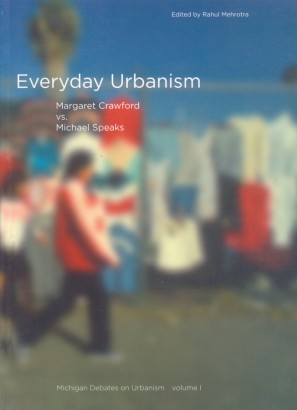 From the Introduction, by Rahul Mehrotra

Urban design and planning has traditionally been involved with the creation of permanent, static urban conditions – as in the implementation of infrastructure, or the designation of open spaces and actual built form. However, in reality, it is the kinetic fabric – people, temporary paraphernalia, etc., that defines the ground reality of a city and the manner in which we experience a particular urban condition. It is this aspect of the city, the Kinetic City, the landscape of Everyday Urbanism that has not received adequate attention and is the focus of our discussion in this first Michigan Debate on Urbanism.

In Asia, and in cities of South Asia in particular, “tidiness” is not as much of a concern as in cities in the West. Architects, planners and urban designers are concerned about the organization of human activity in space, and debates on urbanism are posed in those terms. Discussions generally focus on big moves, such as planning mechanisms, laws and broader infrastructure that are taken so much for granted in the West. therefore in Asia, when someone tidies up a street, puts paving back on a public sidewalk or clears an encroachment – reorganizes or tidies up the Kinetic City (what we are now referring to as Everyday Urbanism) they become urban heroes! It’s an absolute reversal of the West, where a premium is put on creating or facilitating “Everyday Urbanism” while in Asia architects and urban designers are obsessed with the creation of the regular or static city.

So why are people in the West so fascinated by the farmers’ market? It probably is because the farmers’ market, the bazaar of the Kinetic City  has a humanizing effect in the context of low density cities where the public domain is dead – where people have no public realm to connect to each other. J.B. Jackson referred to this as the “third landscape” in his seminal book ‘Discovering the Vernacular Landscape’. He refers to the first landscape as one of mobility, temporal in its existence, which characterized the first phases in the history of settlement. The second landscape he referred to as one where people rooted themselves to a place – created settlements to make the Static City. The third landscape he suggested is, about overlaying the kinetic landscape on the static – connecting people through the creation of the temporal landscape of festivals, markets, cyclic events, etc. – rediscovering the ephemeral and the mobile.

And so when I saw the book, ‘Everyday Urbanism’, I was excited and found it refreshing because it allowed me to make a crossover between issues of urbanism in the West and the East, in developed economies and in developing economies. For it was the idea of the temporal landscape, the Kinetic City or Everyday Urbanism that I thought had universal relevance for our contemporary urban condition.

Of course, these are several questions that emerge in trying to make a case for the universal relevance of this issue. What are the prerequisites for Everyday Urbanism? Does it necessarily mean a dynamic shifting demography and migrants to flourish? A vibrancy, which countries in Asia, and perhaps Los Angeles in the West, have?  Is it about a less severe climate that allows street culture and the bazaar to emerge naturally? Is it about surplus interstitial space in the city that becomes the crucible for Everyday Urbanism? Or about transforming governance patterns and the ways local governments devolve responsibilities with regard to the public domain? In short, is Everyday Urbanism a manifestation in physical terms of the unsettled, restless urban condition experience by cities (more often mega cities) in Asia and the West? These questions take us to many interesting challenges, and especially those that have to do with how we take this Everyday Urbanism beyond description to actual strategy? This volume of the first Michigan Debates on Urbanism engages with this very spectrum of challenging questions.